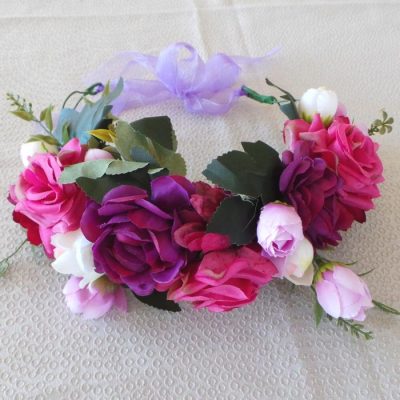 The origins of symbols often have very long histories, some we know, and others remain cryptic. Modern brand names have borrowed from ancient history, anything that seems empowering or mysterious wins. Symbols are a part of our daily lives, but do we know the deeper meanings?

Flowers are symbols for all nations. Flower crowns are used to celebrate seasonal festivals in spring, summer and autumn. The origins of headpieces decorated with flowers dates back a few thousands of years in Europe to celebrate courtship, love, marriage and fertility. Flower, leaf or harvest wreaths/crowns were the fashion when honouring the gods on their special days. The popular Greek laurel leaf garland was reserved for the Gods, the elite and sporting stars of the early Olympics. The Emperors of Rome wore gold laurel wreaths. Flower crowns are a standard part of the Celtic spring festivals like Beltane, which celebrates fertility of the land, animals and people. Weddings are celebrated with flower headdress in various cultures. During the ancient Day of The Dead Mexican Festival, women wear brightly coloured dresses and flower crowns in an effort to overcome their fear of death and understand it as a natural part of life. Music and cultural festivals have become the place to wear colourful flowers in your hair.

The Peace sign is an empowering symbol with a political history. The peace symbol came into existence in 1958, but at this time it didn’t stand for peace; it was a British-derived symbol representing the anti-nuclear movement; a movement which rallied together against British testing of nuclear weapons. The symbol is a combination of the semaphore hand signals for the letters “N” and “D,” standing for “nuclear disarmament”. It eventually travelled to America in the 60’s where it became a popular symbol of peace that represented Nuclear Disarmament. Peace being preferred to any possible destruction, loss of life and pollution of the earth. Freedom loving individuals have used this symbol for 50 years to express their beliefs of a harmony, equality, justice and peace.

It is thought that the pentagram originated from astrological understanding in ancient near eastern civilisations and could represent the planet Venus or evening star. It was popular among the Sumerians in 2700 BCE who saw it as the four corners of the earth and heaven above. In the Euphrates-Tigris region it dates to 4000 BCE. In Pythagorean mysticism it symbolized the human being. It was given negative connotations by Christian Clergy during the conversions when it was called the witch’s or Druids foot and was used as a symbol of protection against Witches (what they thought were witches). The Druids saw it as a symbol of the Godhead. The pentagram was used over the centuries as a magical charm and for wish fulfilment. The pentagram with or without its holistic circle has been reclaimed by neo-pagans as a positive symbol expressing the mysticism of their beliefs.

The meaning of symbols can change overtime. Similar symbols manage to develop in separate countries before trade routes were formed. Some designs are planet-wide; like the signs for water, air, sun, moon, flowers, mountains, fire, stars, trees and spirals. Take time to find the deeper meaning to your favourite symbols!